At the start of August we were asked to shoot a new commercial for a very well known international brand. The shoot was another very early start (3:30am!), on a beach on the east coast of England. It was a very dramatic spot called Botany bay with some amazing white cliff formations. The shoot was a first for us as the DOP wanted to use anamorphic lenses on our Red Dragon, something we had never flown with. They were a set of light weight Kowa anamorphic lenses that were a perfect size and weight for using on our heavy lifted octcopter. We organised a test day the day before the shoot just to make sure all would work as it should in the air, as is always advised when using new kit.

The shoot itself involved capturing sunrise shots flying low over the sea and a series of shots circling a group of swimmers as they approached the ocean. All the shots looked great with perfect light and weather conditions throughout the morning and the addition of being shot on anamorphic lenses. The only thing we had a watch was keeping the horizon dead centre of the frame as the anamorphic lenses tend to slightly bend the edge of frame at the top and bottom, which is especially evident when looking at the ocean horizon. With an early start comes an early wrap and we were finished by 11am ready for the long drive home! 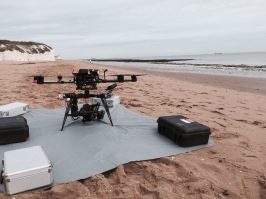 ready to fly on the mobile, anti sand, launch pad

Kowa 40mm anamorphic lens on the Red Dragon on the Movi M15, ready to fly 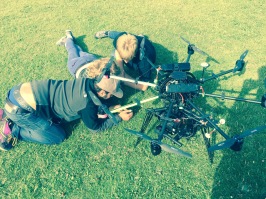 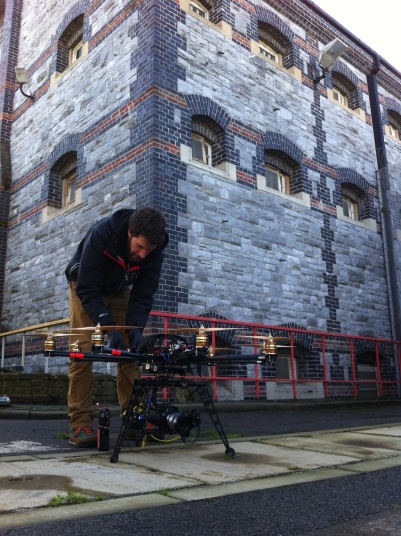 Skyjib about to fly up to stairs

Yesterday we had a shoot for a documentary about the UK TV series ‘Porridge’ for UKTV. As for what has seemed like all winter it was a very windy day and we were a bit concerned about how much we would be able to achieve until the client informed us they mostly wanted interior shots inside the prison wings. This solved the wind issue and also gave us an opportunity to do some very technical interior flying in relatively small spaces.

We managed to do some exterior shots as well or though we did struggle with a lot of wind sheer around the buildings. On landing at one stage a strong gust of wind hit the octocopter at just the wrong time resulting in 2 broken props but nothing too serious. We decided at that stage to abandon outside and the strong winds and move to the interior shots. With long tunnel like prison wings to fly down we experienced a fair amount of the octocopters own down draft being directed back at itself causing a bit of drift and height variations making the shots harder to achieve. But after getting used to how the Skyjib was handling we managed to get some very different and dynamic shots flying up the stairs between the two floors, drifting down the wings looking into cells and rises past the iron bars. The client seemed very happy with the results and they will be airing on UKTV Gold very soon. 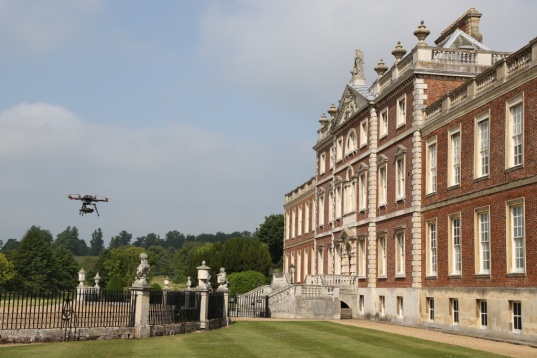 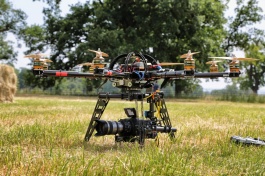 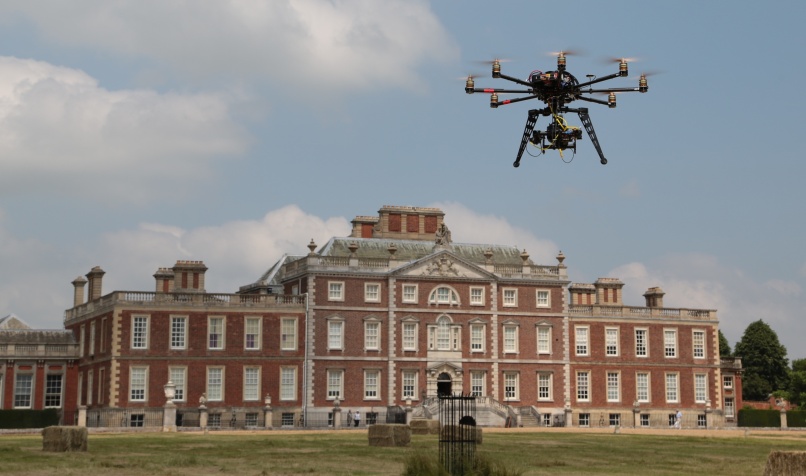 Here are a few photos of the original sky jib 8 octocopter on the ‘Inside the National Trust’ shoot for ITV. Here we are using the Cinestar 3 axis gimbal carrying a Sony FS100. Photos of the new X4 Octocopter and the new gimbal coming soon.