So we have just returned from Saudi Arabia. After some initial issues getting kit and especially batteries through Saudi customs we had a great week shooting the new King Abdullah financial development. Its a very impressive development with over 50 huge towers built from scratch and on course to be completed in a 10 year period, in around 3 years time. At the start they had over 52,000 people working on the project!

With all the restrictions in the UK on flying in a built up area it was great to have the opportunity to film in an environment of huge sky scrapers that we’ve never been able to film in before. We got some stunning results with the Red Epic, some of which will definitely be in the new showreel. We had to deal with some new wind conditions with the angles of the buildings creating some unique shear factors but luckily the weather in Saudi at this time of the year is pretty calm and only at around 25-30c rather than the 55c it can get to in the summer months! We had lots of different shapes, textures and refletions to work with as each build has a unique design with some very unusual shapes using a variety of materials including a lot of glass and some copper and steel.

One unusual circumstance was taking off from the 35th floor of an unfinished tower in order to get some super high wide shots of the development. Again, as we were in Saudi Arabia and under the unusual situation of having the Kings permission to fly, we didn’t have the same height restrictions as in the UK so we were able to get up to around 700ft from ground level for some unique angles.

All the kit was performing great. This was the Movi M15 gimbal’s first real test and it performed amazingly giving us super smooth results even in some windy conditions at high altitudes. The Skyjib 8 octocopter with the Tiger MN 4120 motors and carbon props is also flying really well with the extra weight of the Red Epic and the M15.

We got a lot of interest from the locals and may well be headed back shortly to complete some more filming on a different development in Riyadh.

The Skyjib in the site office

Rebuilding all the kit in Saudi Arabia after landing

Shot planning on the last day 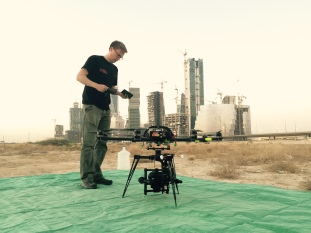 Steve setting up for the sunrise over the KAFD development 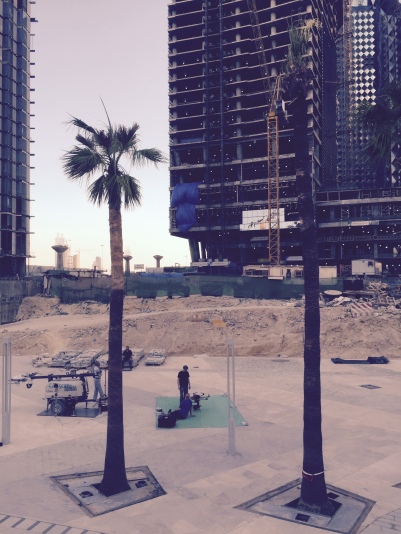 Prepping for sunset on the last day

Steve setting up the Red Epic before take off

A model of the completed KAFD development. It’s pretty huge! 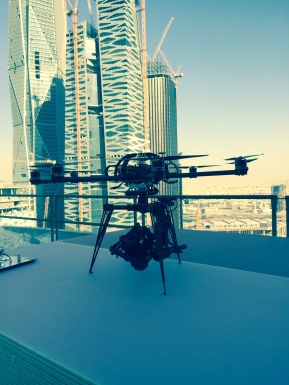 The Skyjib, Movi M15 and Red Epic combo about to take off for the first time from the 35th floor!

2 Octocopters, 2 gimbals, ground station, Red Epic and everything that goes with it all safely packed in Peli cases. 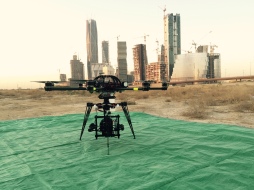 Skyjib about to take off

tallest building in the development

Steve carrying the Movi away after a successful flight.